Living in a bustling tiny metropolis with mostly aggressive drivers battling rush hour traffic, defensive driving is my default auto-pilot mode behind the steering wheel. As the automotive industry gears up for autonomous driving, I wonder how these self-driving cars will fare versus the human driver. Autonomous vehicles (AVs) will depend on a host of advanced driver assistance systems (ADAS) and vehicle-to-everything (V2X) communication technology to steer their way safely forward.

When it comes to pushing the cause for self-driving cars, too much is at stake for car makers, and neither human nor computing error can be tolerated. The AV makers’ efforts are yielding results. In their latest annual AV testing data released on February 9, 2021, the California Department of Vehicles (DMV) data1 revealed that the number of disengagements dropped by a significant 60 percent.

The DMV defines disengagement as “how often their vehicles disengaged from autonomous mode during tests (whether because of technical failure or situations requiring the test driver/operator to take manual control of the vehicle to operate safely).”

While DMV’s data is a good indicator that the AV industry is progressing, the road towards totally hands-off and eyes-off autonomous driving is still arduous, and much more so for Level 5 autonomy – when the steering wheel will make way for a plush passenger seat.

The AV will be armed with an impressive array of sensors - Radar, Lidar, camera, working in tandem with V2X communication to drive itself. The objective is to create the ideal self-driving car that can defend its passengers against a multitude of scenarios – from errant fellow human drivers, to jaywalking pedestrians, bad weather, and more.

One of the noble objectives of autonomous driving technology is to some day achieve zero road accidents. A very tall order since 1.35 million people die on the roads every year. This is why developers of self-driving technology will need to thoroughly verify their designs, such as testing the sensor response protocols against multiple traffic scenarios, and pre-empt all corner cases.

Bringing Automotive Test from the Road into the Lab

AV makers and their supporting testing counterparts are investing in both hardware and software to develop and test ADAS applications. These will replace the human eyes, ears, limbs and the vital brainwork with a plethora of sensors and algorithms that will beat the average human reaction time of 1.6 seconds to slam on the brakes to avoid hitting a child who might run onto the road, to a mere 0.5 seconds.

To achieve all these capabilities, AVs will employ various sensor technologies, such as camera, radar, lidar or ultrasound. Testing these systems for individual performance and interoperability presents a whole new world of challenges, as each AV will have its distinct configurations and combinations that need flexible modelling in the test systems.

Addressing the need for robust yet flexible test systems that can evolve in tandem with new industry requirements, Keysight Technologies, IPG Automotive and Nordsys are collaborating to create an Autonomous Drive Emulation (ADE) platform.  It will emulate synchronized connections to all relevant sensors in a car such as the global navigation satellite system (GNSS), vehicle-to-everything (V2X), camera, and radar, in a single system. 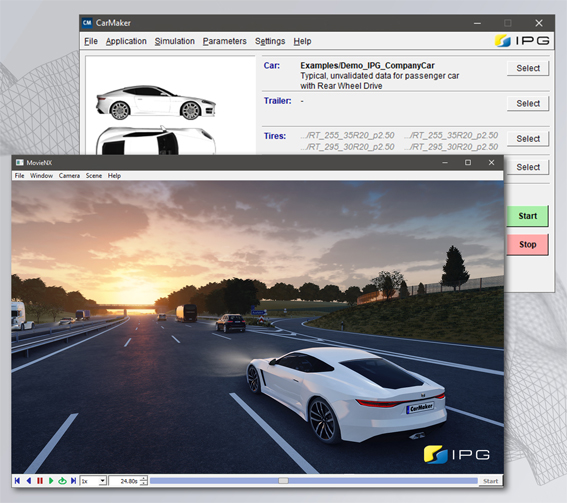 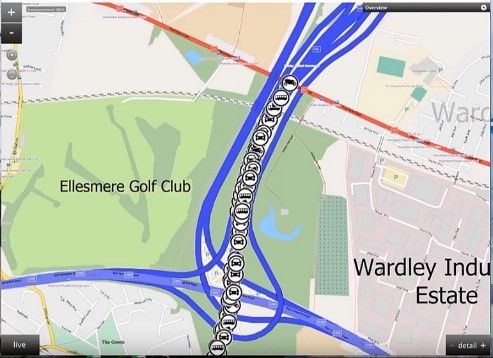 (Above) Nordsys adds software-controlled applications to ADE, focused on V2X communications to emulate the RF congestion that occurs in real-life traffic situations.

As one of the AV maker’s greatest challenges is physical drive testing on the road, the ADE platform aims to bring the road into the lab. In a recent interview2, IPG’s Raphael Pfeffer, manager of IPG’s Innovation Management team, said that billions of test kilometers would be required for highly automated driving functions. “That is not feasible from an economic point of view, especially for higher functions such as automated driving in the city, meaning from level 3 onwards, the creation of complex test scenarios is necessary,” said Mr Pfeffer.

The teams behind the ADE platform envision the solution will be able to bring those required test scenarios from the road into the lab in a closed loop. This would allow for any level of complexity regarding the test environment, bridging the gap between real tests and mere simulation in the domain of hardware-in-the-loop. 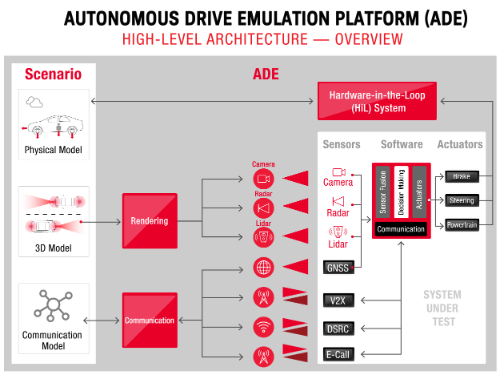 Besides emulating a myriad of scenarios to test the responses of individual devices, systems and the entire autonomous vehicle, AV makers must also ensure they keep up to speed with evolving industry and regulatory conformance standards.

For example, are the software and hardware platforms compliant to the latest 3GPP standards, including 5G New Radio (NR)? Can vendors quickly and accurately validate C-V2X and 5G chipsets and devices, or perhaps turn to third party test expertise, such as Keysight’s 5G C-V2X test lab, to qualify their product development.

Much work remains to be done on the road to fully self-driving cars, but unlike the millennials and Gen Zs who are anticipating the arrival of Level 5 autonomous driving, the defensive driver in me prefers to monitor, and see how the AV makers are progressing in their quest to enhance safety of autonomous vehicles.

In the not-too-distant future, I can probably loosen my grip on the steering wheel and step on the peddle as I overtake that defensive self-driving car in front of me, knowing it will give way to me.