I was maybe 16 years old when I asked my dad if I could drive the car. He was deep in thought at his desk and absent-mindedly said something which I took to be Yes. Just to be on the safe side, I made sure to take it out only when he had to go on an out-of-town trip. I had not driven more than a few miles before I realized I was going the wrong way down a one-way street. I also realized I did not really know how to reverse. As the car swerved from left to right, I wished there was a switch I could press - for the car to reverse on its own and take me back to safety.

French painter Paul Cezanne once said: “Perhaps I was born too early; I was more the painter of your generation than of mine.”

Maybe I was also born too early, because today's automobile is at the point of progressing from Level 2 to Levels 3 & 4 of automation and has little trouble reversing on its own. These autos include an array of components such as DCUs, ECUs, GPUs, high-definition cameras, sensors, and storage devices for advanced driver-assistance systems (ADAS), connectivity, and navigation. In addition, they include circuitry for control of the powertrain, chassis, body & comfort functions, human-machine interface, as well as infotainment. The in-vehicle network (IVN) and associated cabling to connect this functionality is the third heaviest component in the auto as well as the third highest in cost – only surpassed by the chassis and the engine itself.

The Story Behind Automotive Ethernet

All this was probably not on Thomas Konigseder’s mind though, back in 2004. Thomas was Electronics Engineer and Group Manager at BMW and was trying to solve a basic problem; he was trying to find a way to speed up the software flash programming process for BMW cars. If he used the existing CAN interface, flashing the 1 GB of software expected for the next BMW model would have required several hours to complete. After a lot of evaluation and collaboration with semiconductor partners, Thomas chose standard 100Base-TX Ethernet, and in 2008 the BMW 7-series was the first serial car with an Ethernet interface.

Even after Thomas’ decision, Automotive OEMs took a while to transition from where Ethernet was used solely for software downloads and onboard diagnostics when a vehicle is parked - to where it is used for in-vehicle networking when mobile. Concerns centered around EMI/EMC, latency, and Ethernet’s vulnerability to hacking and tampering from compromised ECUs; unused ports; and external interfaces such as cellular, Wi-Fi, Bluetooth, and diagnostics.

For these reasons, compliance & conformance testing is critical for automotive Ethernet. Testing should include:

The Need for Multi-Gig Automotive Ethernet

The growing number of automotive applications today continues to drive up bandwidth and other requirements for the IVN. Ethernet will meet these requirements, because Ethernet technology and standardization continues to evolve for autos. And what started out as a solution for the luxury line of BMW is now mainstream for most vehicles; see diagram below: 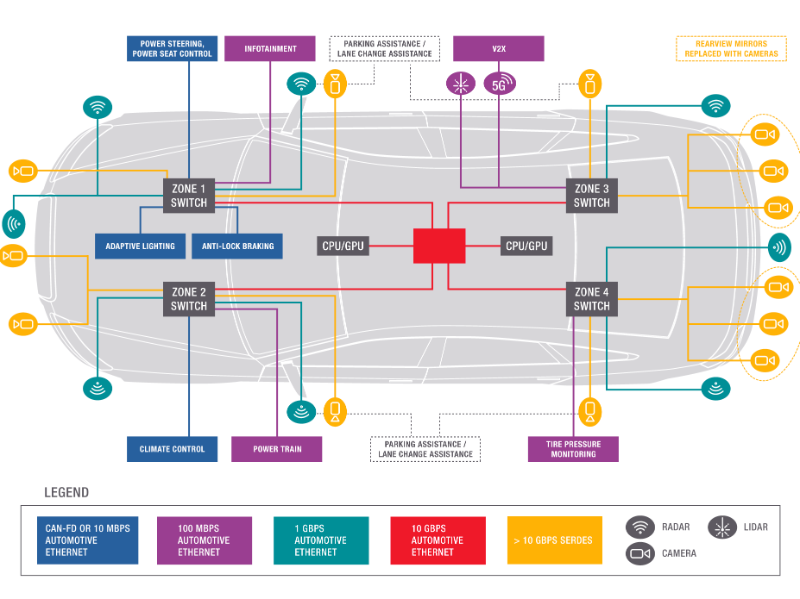 In fact, automotive OEMs are already starting to evaluate Keysight's Beta version of Multi-Gig Ethernet (2.5Gbps, 5Gbps, and 10Gbps) due to increasing bandwidth demands from:

see the Table below:

Warren Bennis, an authority on market leadership used to say: “The factory of the future will have only two employees - a man and a dog. The man will be there to feed the dog. The dog will be there to keep the man from touching the equipment.”

For further information on networking technology in the automobile, please reach out or go to: